With the first release candidate (RC), Univention are announcing the finalisation phase for the major release of Univention Corporate Server, UCS 5.0. They will be concentrating on stabilising the features implemented up to this point. Compared to the beta version of UCS 5, which was published in December, they have been able to achieve many improvements, in particular in the web interface of the UCS portal, the management console and the Univention App Center.

Since the beta release, Univention have significantly expanded the App Center. During the implementation of the largely redesigned user interface of UCS 5, they have significantly improved its clarity and simplified access to functions even more.

A completely new feature is to select several apps in the frontend and to install, update or uninstall them in one step. For this purpose, all required app information and setup questions are collected by the App Center which then carries out the (un-)installation or the necessary updates in a single step. This facilitates the commissioning and updating of UCS environments significantly. 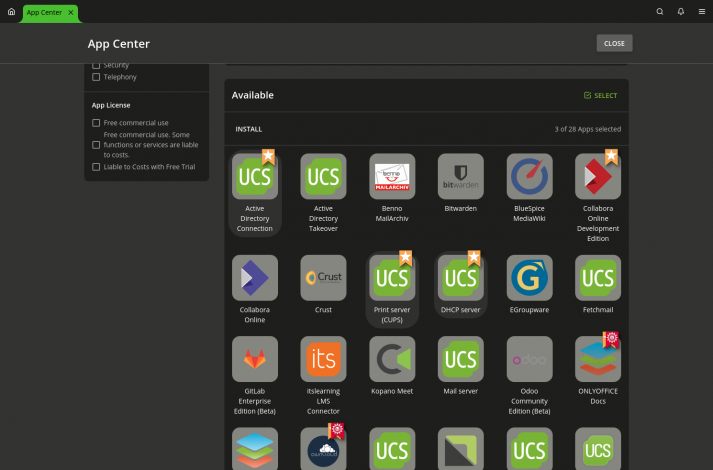 The new multi-select function of UCS 5.0 allows you to start a process, e.g. installation, for several apps simultaneously.

Thanks to these improvements, the App Center now provides an explicitly expanded range of functions compared to UCS 4. It thus becomes the first contact point for the commissioning of services after a successful UCS installation. UCS will therefore start to provide users with useful recommendations in the App Center instead of continuing to offer a selection of some components as part of the basic installation.

Portal: Updated front end and integration of the Management Console

The most important function of the Univention portal is to easily access web applications for users. One of these applications is the Univention Management Console (UMC), which allows administrators to centrally manage the domain and thus all services, users and resources. The UMC itself consists of numerous modules for different purposes. UCS 5.0 simplifies the use of the UMC by bringing the individual modules of the UMC into the UCS portal. So admins can already access them easily from there. As the development team want to maintain clarity at the same time, they are using the portal’s new feature of collecting several tiles of the portal in individual folders. This is similar to how users are accustomed to using smartphone interfaces. The integration of the UMC into the portal is the latest new feature of UCS 5.0. The team will finalise the partly incomplete user guidance by the time of the release. 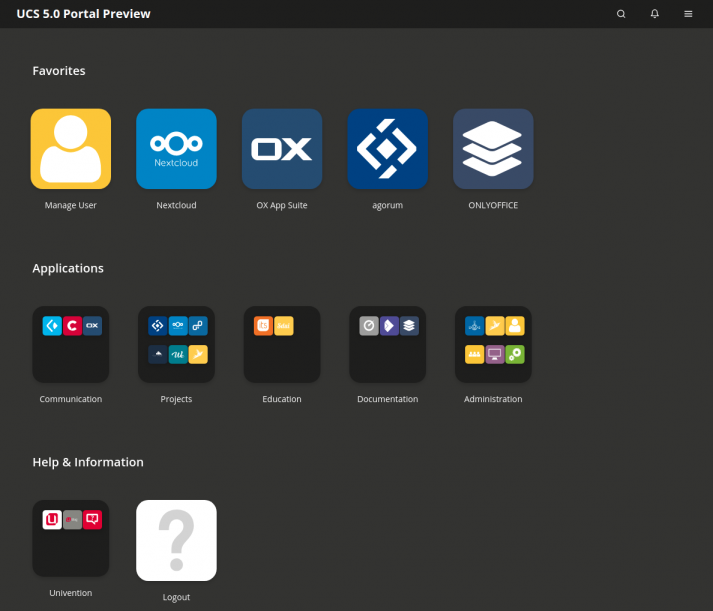 You can organise the interface of the UCS 5.0 portal like you do on your smartphone.

With the completely redesigned portal of UCS 5.0, Univention are also laying the foundation for the gradual conversion of the UCS web interfaces to a new Javascript framework. To this end, they have re-implemented the portal in Vue.js over the last few weeks. The previous dojo-based implementation will be replaced just in time for the release candidate. This switch brings a whole series of advantages: The new portal frontend has significantly improved accessibility, offers modern integration options, and an overall leaner implementation. Using this as a basis after the UCS 5.0 release, we not only intend to significantly expand the portal’s functionality but also to gradually convert the self-service and functions of UMC and UCS@school. The team know this process will accompany them for a long period of time after UCS 5.0. Thus they take special care to ensure that the changes go unnoticed by the end users. The integration of all modules in the portal provides the perfect ground for this, as the portal supports modules with the old and new framework in parallel.

What is the status of the release candidate?

Today’s release candidate of UCS 5.0 is not intended for productive use, but it determines the range of functions of the first stable version of UCS 5.0 to be published. On this basis, they will be eliminating the last problems in the next few weeks. Using extensive tests, they will make sure that you can use the final version productively in a stable and high-performance manner. Its release is planned for the beginning of May.

The RC also gives you a good picture of which functions are available in UCS 5.0 at the time of release and which are still missing compared to UCS 4.4. This means, some apps such as monitoring, UCS@school or third-party integrations will only be published gradually after the release. If you update UCS 4.4 to UCS 5.0, the system automatically checks the availability of the installed apps. So the update will only be approved when these modules have been released for UCS 5.0.

For more information on Univention please see our web site and contact CustomTech (email info@customtech.com.au or call) to arrange a FREE evaluation and discuss your needs.

(This article is based on the original article by Ingo Steuwer on the Univention site).